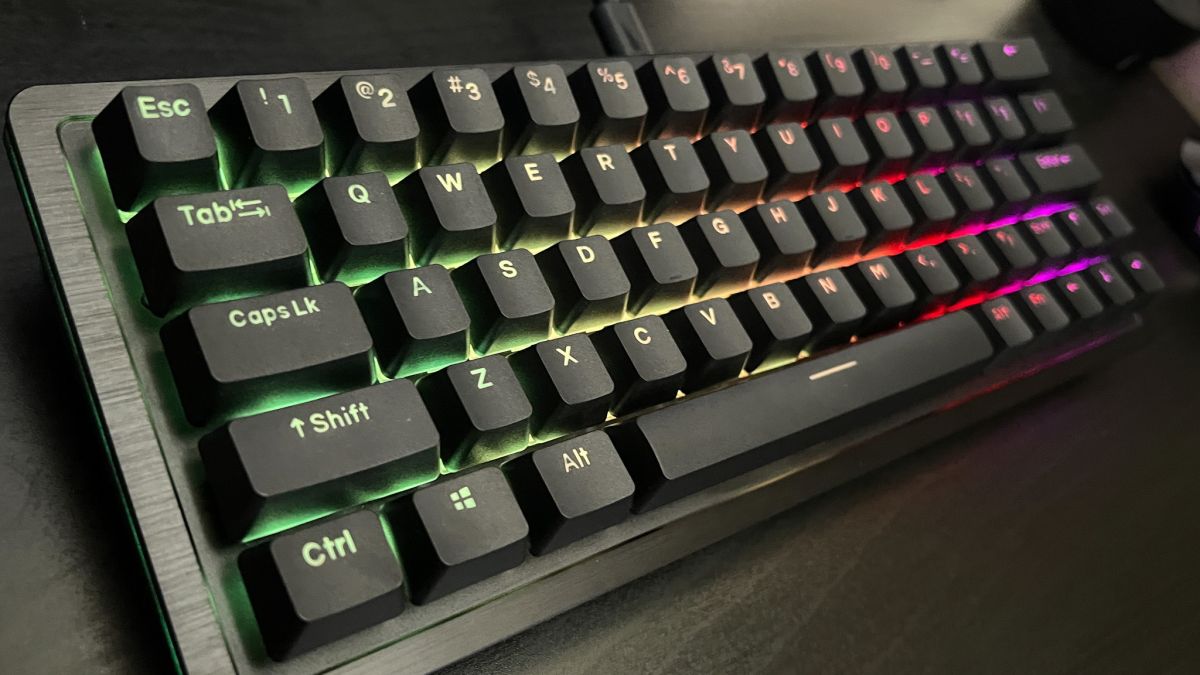 Mountain may be relatively new to the world of mechanical keyboards, but the brand is certainly making a splash.

At $139.99 / £109.99, the new miniature Mountain Everest 60 is a fairly pricey affair, though one look at the world of high-end gaming keyboards shows it’s clear that the overall experience on offer here is a steal. Investing in quality over quantity, the brand’s first keyboard, the Mountain Everest Max, launched two years ago. The new release is a scaled down version with some particularly thoughtful improvements on the original.

The Mountain Everest 60 is a 60% gaming keyboard like no other. That goes beyond the handy arrow buttons and optional modular number pad, though, and straight to the source; the in-house Mountain switches. These are some of the most pleasing springs I’ve had my hands on, and when taken with the thoughtful design, comfortable shape, and suave RGB effects they push the Mountain name even further into the limelight.

I got to grips with the Everest 60 over the course of four weeks, using it as a daily driver in both work and play to find out just how well it lives up to its predecessor.

A 60% layout usually eschews all extraneous functions so that your keyboard can focus on core gameplay without having to worry about space for arrow buttons and a function row. That means I often have a hard time fully settling into a 60% keyboard, particularly when it comes to productivity. Rerouting buttons via a function layer has always felt like a band-aid on the broken leg of this layout, serving neither gamers nor office aficionados. Spotting the arrow keys fully intact on the Mountain Everest 60 (nestled between delete and shift keys no less), was my first indication that I was going to have a good time with this keyboard.

You’re getting standard 60% design elsewhere, with no function row, home, insert, or end keys. However, those are the only sacrifices you’re making to get this smaller footprint, and that’s pretty damn impressive. Sure, it’s longer than the likes of the HyperX Alloy Origins 60 or Razer Huntsman Mini, but there’s still plenty of space to swing a mouse and the modular design means you can attach the optional number pad to the left or right of the deck as well.

That black brushed design has stuck around from the Everest Max, though it is less noticeable due to the reduced bezel size here. The RGB is bold and bright, and I was particularly pleased to find the LED light strip stuck between the two panels has made a return. It’s a subtle touch that I always enjoyed in the original model; a hint of color without glaring it across your desktop.

Overall, this feels like a reliably sturdy deck. The USB-C connection between the number pad and the main keyboard also feels a little less precarious, by virtue of a slightly longer connection panel compared to the original in the Everest Max. Magnetic feet risers are also included, with three increments of height available. I placed the whole deck on the highest setting, for ultra-ergonomics and was particularly pleased with the comfort on offer.

Existing Mountain fans will be disappointed to learn that the modular components shipped with the Everest Max model aren’t compatible with the new Everest 60. As hard as I tried, there’s no connecting my beloved digital display dial to this deck, the bezels are simply too skinny to support the lip of the device. Plus, the programmable macro buttons on the original number pad are nowhere to be found this time around. That’s a little disappointing, it was these touches that solidified the Mountain Everest Max’s position on my desktop long-term and I can’t help but feel some of the spark has been lost in their absence.

Of course, with a 60% design and a slightly lower price point, the Everest 60 isn’t trying to be the all-in-one command centre its ancestor was. In truth, there’s a new set of features that propel the new release into the spotlight; and they’re all under the keys.

Our testing unit shipped with Mountain Linear 45 switches, a particularly snappy set of springs with a super-fast debounce and a satisfying heft to them. These aren’t heavy switches, but the force required to actuate is far greater than other linears in my arsenal, without ever feeling cumbersome. It’s a strange sensation; with a soft, smooth landing but – at the same time – a satisfying clack to each keypress. Thankfully, these switches come factory lubed, so there’s no need to take the deck apart before even plugging it in.

Of course, if you don’t get on with the Linear 45s, Mountain is also shipping the Everest 60 with its Tactile 55 and Linear 45 Speed switches. This is a hot-swappable keyboard, though, so you can also trade them out for anything you’d prefer, thanks to the 3 and 5-pin seats.

On top of those switches, you’ll find a set of PBT doubleshot keycaps, which I was particularly relieved to find. The original Max model shipped with ABS domes, and cheap-feeling ones at that. It was a frustration I held firmly against that $300 MSRP, but thankfully you’ll find nicely tactile, durable keycaps here. The surface texture is also pleasantly grainy, feeling infinitely better under the hand and keeping things fresh even during those longer (read sweatier) sessions.

The Mountain Everest 60 owes a lot of its performance prowess to those switches. They’re truly outdoing themselves here, offering up a comfortable tension without fatigue, and a comfortable bottom-out that feels speedy and crisp in its debounce. Needless to say, typing feels fantastic. I averaged 92WPM in typing speed tests on this deck, with 98% accuracy. That’s a nice improvement over same-day tests on the original Max (90WPM at 96% accuracy), largely down to the fact that the increased resistance under here makes for a particularly precise typing experience, and those PBT keycaps offer greater purchase across the top as well.

I wasn’t quite typing at the breakneck speed afforded by the Keychron Q2 (measuring in at 96WPM at 99% accuracy) with its lower travel distances and lighter actuation force, but I did prefer the extra weight to the Everest overall.

During gameplay, the snappiness and weight of those keys made for precise shots and speedy dodges. Reaching around the WASD keys was easy and scampering across the keyboard during more intense Apex Legends moments felt natural as well. Response times were solid across Borderlands 2 and Apex, though wouldn’t hold up to more competitive decks with faster scan and polling rates.

The auditory profile of the Mountain Everest 60 was also impressive. There’s a silicon mat placed in the main housing here, with extra foam lining the PCB and sitting between the PCB and top plate. That all makes for excellent dampening, and a solid thud to boot. I never noticed any stabilizer twang or switch reverb running through the chassis; something that did present as an early problem with the original model.

Should you buy the Mountain Everest 60?

The Mountain Everest 60 is a serious contender for the best 60% keyboard out there. Its form factor strikes a perfect balance; saving space while still providing access to useful arrow keys. This is a particularly versatile deck (just look at that modular number pad, for instance) that will certainly look good and play well on anyone’s desk. At a fairly high asking price, I’d recommend this more for those on the hunt for an enthusiast-level typing experience than anyone looking for a suite of controls at their fingertips.

The Everest 60 doesn’t offer the same level of sheer functionality as its predecessor, the Everest Max, did, but does represent a nice halfway point between a tiny 60% device and a TKL. If you’re looking to downsize, but don’t want to remove too much functionality, this is a solid bet. However, if you’re after blistering speed at the expense of all other functions, we’d recommend checking out the HyperX Alloy Origins 60.

How we tested the Mountain Everest 60

I ran the Mountain Everest 60 through everyday work and play over the course of four weeks, using the deck as my main driver throughout. I tested response times, debounce, and switch feel using Apex Legends and Borderlands 2, while also testing actuation speeds and scan rates on platformers like Celeste and Hollow Knight. I also fully stripped the Everest 60 to check the ease of hot-swapping its switches and performed typing tests using TypingTest.com.

You can find out more about how we test gaming keyboards right here, or check out how we make all our recommendations in our full GamesRadar+ Hardware Policy.

We’re also rounding up all the best Razer keyboards and our top tips for budget gaming keyboards as well. Or, for the perfect partner, check out the best gaming mouse options on the market.